01. Jonah Flees the Presence of The Lord

Jon 1:1  Now the word of the LORD came to Jonah the son of Amittai, saying,
Jon 1:2  “Arise, go to Nineveh, that great city, and call out against it, for their evil has come up before me.”
Jon 1:3  But Jonah rose to flee to Tarshish from the presence of the LORD. He went down to Joppa and found a ship going to Tarshish. So he paid the fare and went down into it, to go with them to Tarshish, away from the presence of the LORD.
Jon 1:4  But the LORD hurled a great wind upon the sea, and there was a mighty tempest on the sea, so that the ship threatened to break up.
Jon 1:5  Then the mariners were afraid, and each cried out to his god. And they hurled the cargo that was in the ship into the sea to lighten it for them. But Jonah had gone down into the inner part of the ship and had lain down and was fast asleep.
Jon 1:6  So the captain came and said to him, “What do you mean, you sleeper? Arise, call out to your god! Perhaps the god will give a thought to us, that we may not perish.”

Jonah Is Thrown into the Sea

Jon 1:7  And they said to one another, “Come, let us cast lots, that we may know on whose account this evil has come upon us.” So they cast lots, and the lot fell on Jonah.
Jon 1:8  Then they said to him, “Tell us on whose account this evil has come upon us. What is your occupation? And where do you come from? What is your country? And of what people are you?”
Jon 1:9  And he said to them, “I am a Hebrew, and I fear the LORD, the God of heaven, who made the sea and the dry land.”
Jon 1:10  Then the men were exceedingly afraid and said to him, “What is this that you have done!” For the men knew that he was fleeing from the presence of the LORD, because he had told them.
Jon 1:11  Then they said to him, “What shall we do to you, that the sea may quiet down for us?” For the sea grew more and more tempestuous.
Jon 1:12  He said to them, “Pick me up and hurl me into the sea; then the sea will quiet down for you, for I know it is because of me that this great tempest has come upon you.”
Jon 1:13  Nevertheless, the men rowed hard to get back to dry land, but they could not, for the sea grew more and more tempestuous against them.
Jon 1:14  Therefore they called out to the LORD, “O LORD, let us not perish for this man's life, and lay not on us innocent blood, for you, O LORD, have done as it pleased you.”
Jon 1:15  So they picked up Jonah and hurled him into the sea, and the sea ceased from its raging.
Jon 1:16  Then the men feared the LORD exceedingly, and they offered a sacrifice to the LORD and made vows.

Jon 1:17  And the LORD appointed a great fish to swallow up Jonah. And Jonah was in the belly of the fish three days and three nights.

The character of Jonah is drawn from the historical prophet of the same name mentioned in 2 Kings 14:25.

Jeroboam the son of Joash, king of Israel…

2Ki 14:25  He restored the border of Israel from Lebo-hamath as far as the Sea of the Arabah, according to the word of the LORD, the God of Israel, which he spoke by his servant Jonah the son of Amittai, the prophet, who was from Gath-hepher.

It is clear that there was a hero of Ninevah – who has given birth to other legendary figures, such as Gilgamesh and the Greek hero Jason .  Although the prophet Jonah lived in the eighth century BCE, the Book of Jonah was written centuries later during the time of the First Persian Empire, an empire based in Western Asia founded by Cyrus the Great in BC. 550–330

Jonah 1:2  “Arise, go to Nineveh, that great city, and call out against it, for their evil has come up before me.” …
Jon 1:3  But Jonah rose to flee to Tarshish

The contrast between Nineveh and Tarshish was vast. Nineveh was located east of the Tigris River in modern-day Iraq. It was more than 800km east of Jonah’s hometown. Tarshish, in contrast, was west of Gath-hepher. In fact, Tarshish was in the opposite direction of Nineveh. Jonah was trying to put as much distance as he could between himself and the Assyrians. Whatever happened to Nineveh, Jonah would not be there to see it.

Jonah’s reason for running was that, quite simply, he did not like the Assyrians. Assyria was an idolatrous, proud, and ruthless nation bent on world conquest and had long been a threat to Israel. When God sent Jonah as a missionary to the capital, Nineveh, he was being asked to preach to the enemy. As far as Jonah was concerned they could all be punished by God. Jonah wanted Nineveh to be destroyed. He felt they deserved God’s judgment. Jonah didn’t want to see God’s mercy extended to his enemies.

A long-established expression among sailors uses the term, "a Jonah", to mean a sailor or a passenger whose presence on board brings bad luck and endangers the ship

Jonah 1:17  And the LORD appointed a great fish to swallow up Jonah. And Jonah was in the belly of the fish three days and three nights.

Though it is often called a whale today, the Hebrew, as throughout scripture, refers to no species in particular, simply saying "great fish" or "big fish" – perhaps the word “sea monster” might be more appropriate today. 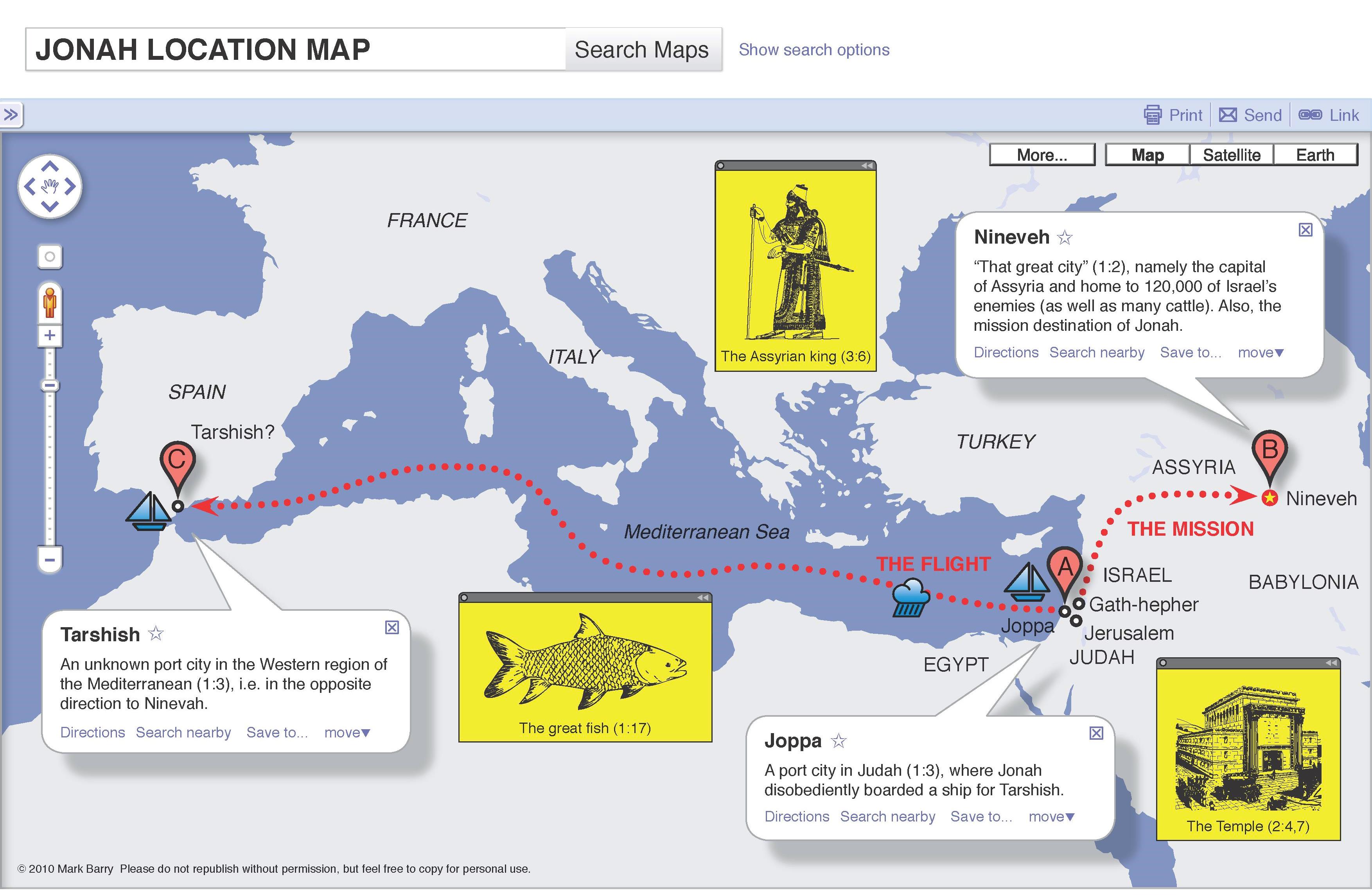