2Corinthians 6:1  As we work together with him, we urge you also not to accept the grace of God in vain. 2  For he says, “At an acceptable time I have listened to you, and on a day of salvation I have helped you.” See, now is the acceptable time; see, now is the day of salvation! 3  We are putting no obstacle in anyone’s way, so that no fault may be found with our ministry, 4  but as servants of God we have commended ourselves in every way: through great endurance, in afflictions, hardships, calamities, 5  beatings, imprisonments, riots, labors, sleepless nights, hunger; 6  by purity, knowledge, patience, kindness, holiness of spirit, genuine love, 7  truthful speech, and the power of God; with the weapons of righteousness for the right hand and for the left; 8  in honor and dishonor, in ill repute and good repute. We are treated as impostors, and yet are true; 9  as unknown, and yet are well known; as dying, and see–we are alive; as punished, and yet not killed; 10  as sorrowful, yet always rejoicing; as poor, yet making many rich; as having nothing, and yet possessing everything.

2 Corinthians was written after Paul left Ephesus, probably in late A.D. 55 or very early A.D. 56. He had struggled with the Corinthian Christians, who had been confused by opponents of Paul’s teaching on the Grace of God, and who had also exhibited some questionable moral and ethical traits. Paul was anxious to discover how his previous “stern letter” had been received, and at the same time determined to defend his reputation as a disciple of Jesus.

What is deeply challenging is the way Paul lists his credentials. Paul lists his “afflictions, hardships, calamities, beatings, imprisonments, riots, labours, sleepless nights, hunger”; he describes himself as “unknown, punished, sorrowful and poor”.   We are so accustomed to the way modern Christian leaders describe themselves as ‘successful’, ‘popular’, wealthy’, and ‘anointed’ pastors to thousands of adoring fans that Paul’s credentials are quite startling.

A Christ-follower cannot use the language of success as defined by our post-modern culture. The only sign of success that defines a Christian is that, despite our weaknesses, the Grace of God was seen. All else is vanity.

The Scripture passage for the day is drawn from Reuben Job and Norman Shawchuck, A Guide to Prayer for Ministers and other Servants, (Nashville, The Upper Room 1983), 287.
This reflection is from my own devotional exercises for the day. 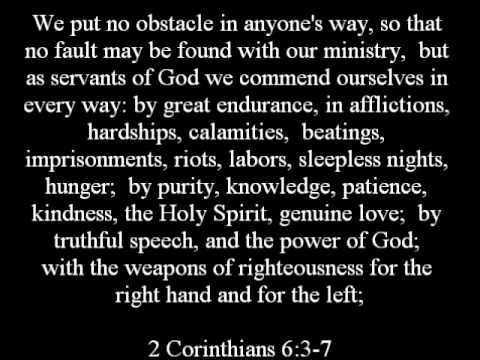 And are we yet alive,
And see each other’s face?
Glory and thanks to Jesus give
For His almighty grace!

Preserved by power divine
To full salvation here,
Again in Jesus? praise we join
And in His sight appear.

What troubles have we seen,
What mighty conflicts past,
Fightings without, and fears within,
Since we assembled last!

Yet out of all the Lord
Hath brought us by His love;
And still He doth His help afford,
And hides our life above.

Then let us make our boast
Of His redeeming power,
Which saves us to the uttermost,
Till we can sin no more.

Let us take up the cross
Till we the crown obtain,
And gladly reckon all things loss
So we may Jesus gain.